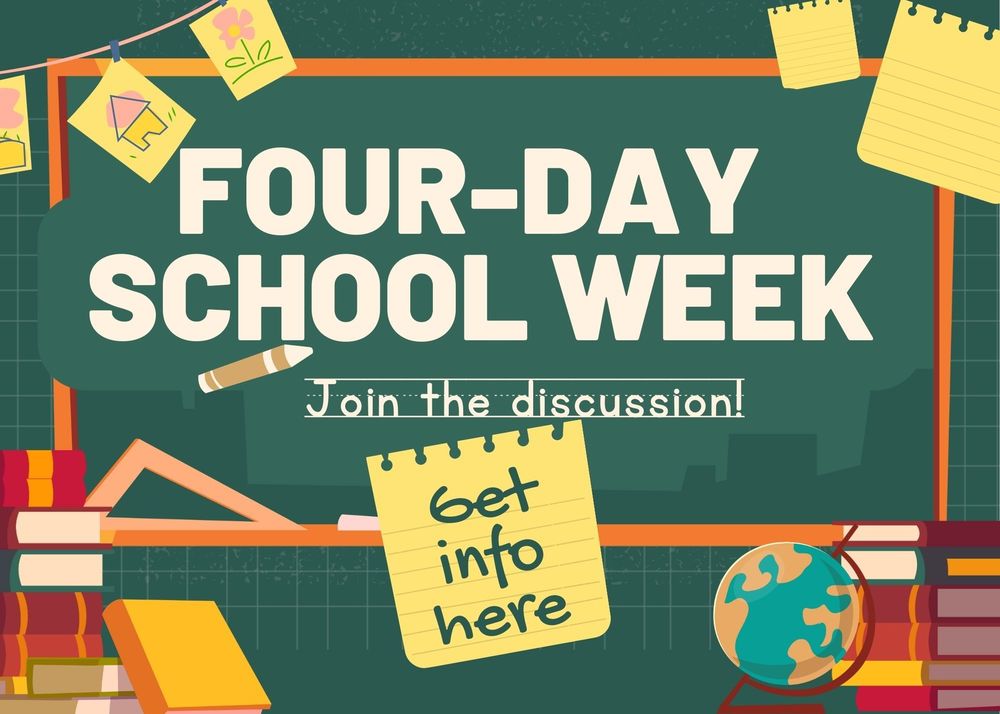 Please review the research below regarding a four-day school week. On Friday, January 27th, we will post a survey for community members to voice their perspectives. That survey will be available in English and Spanish and will remain open for 10 days.

When looking at the research, there are some caveats to keep in mind. First, while much of the research is centered around academic gains and losses as well as financial savings, it is actually in the secondary and tertiary details of that same research that we find much of the answers to our questions. Additionally, it’s important to note that the research here is actual peer-reviewed study; it is not the product of random Google searches.

While the majority of the research shows that a four-day school week has little to no effect on academic performance (article by Paul Hewitt linked HERE), we believe when incorporated with our robust plan for Friday School that we will actually be able to realize academic gains, especially with our most at-risk students. Our primary reason for going to a four-day school week begins (but doesn’t end) with the concern we have for recruiting and retaining highly qualified teachers. This is the number one reason that districts in Montana are going to the four-day week. The stark reality is that a competitive field of applicants for teaching positions will actually improve the levels of teaching and learning in the classrooms. So while we’ve said our “why” is to recruit and retain teachers, we do believe that by doing so in this way, we will see significant gains in academic achievement, which is our ultimate goal here.

While we talk about student performance, one very important factor to take into account is the drop out rate. An older study out of New Mexico (article linked HERE) saw a major decrease in the dropout rate, from 8.1 percent down to 3.3 percent as a direct result of the four-day school weeks. That same study references no negative impact on students and even stated that the elementary students were able to adjust to the longer day. A suggestion herein was modifying the lunch and breakfast schedules to better fit the longer day; this is very doable. The study also noted a qualitative decrease in wasted time while also pointing out that some schools do note academic improvement. We will be a school that will report improvement.

There is no end on the horizon regarding the teacher shortage. It is bleak. The Independant Record recently reported (article linked HERE) that “The total number of teaching licenses issued in Montana has decreased by nine percent in the last five years, according to the 2022 teacher licensure report from the Office of Public Instruction. In that time, the amount of new licenses issued decreased by twenty-one percent and the number of educators who have maintained their licenses shrunk by about seven percent.” This is why we have had to turn to provisional licenses and emergency authorizations, “which allow people who are not currently qualified educators to fill vacant positions, [and the number of these authorizations] grew by forty-two percent from 2018 and peaked with 173 emergency licenses in 2021. . . Emergency licenses expire after one year.”

Another study (article linked HERE) shows that job satisfaction substantially increased for teachers and administrators. This is really important because it has a direct correlation to the recruitment and retention of quality staff.

A recent article published in K12Dive (article linked HERE) discusses benefits of the four-day week and how it can help to combat teacher burnout. At a time when teacher job satisfaction is lower than it has ever been, there’s a staggering decrease in the number of people entering the profession, and many teaching jobs receive 0-2 applications, we should definitely recognize that teaching is a stressful job and the nature of it is such that the more we can do to counteract that stress and potential burnout, the better. A four-day school week counteracts the effects of burnout in multiple ways.

A concern voiced about teacher motivation should also be discussed here. Just because four-day weeks attract more applicants than five-day weeks does not at all mean that teachers are less motivated to teach or want to spend less time with kids. There is no data on that because it’s not a reality. The fact is that teachers are still entering the profession for the same reasons they always have: to teach and reach kids. While there are always a few exceptions to every rule, those are generally the ones that eventually wash out of the profession anyway. It’s imperative that we treat teachers with the understanding that they have positive intent with regard to their careers, teaching, and learning.

This movement is actually quite mature in age, although it’s picked up quite a bit of momentum over the past decade or so. Colorado was actually a leader of the movement to four-day school weeks, dating back to the 1980s. Currently, more than one-third of Colorado’s school districts are successfully operating on a four-day week (article linked HERE) another report cited almost two-thirds. Most of these districts are rural, and many have remoteness similarities to West Yellowstone.

A recent blog post by The Future of Working (blog linked HERE) lists a plethora of advantages including not only recruitment but also mentions the benefits of hosting sporting events on Fridays and Saturdays. This component would be huge for West Yellowstone as instructional time largely goes on pause on days when a large portion of the student body is absent for a sporting event. Other advantages include students adjusting quicker and more positively than anticipated, improved efficiency with instructional time, decreased disciplinary issues, increased attendance rates, and more.

It’s important to note here that we will put substantial effort into planning so that negative effects are minimized. This will include some creative flexibility in the K-2 classrooms as well as multiple things for everyone in the Friday programming.

One concern that has been voiced is a concept that the four-day week can, in some places, be linked to an increase in juvenile crime (article linked HERE). However, there are two reasons why this is not applicable to West Yellowstone. First and foremost, we will be offering robust Friday School programming. Secondly, a deeper dive into the research will show that the areas that saw an increase in juvenile crime are areas that already had substantial issues with regard to underage crime. Comparatively, this would not be considered an issue in West Yellowstone.

With all of the above in consideration, we believe that a four-day school week is in the best interest of West Yellowstone School’s students, staff, and community.